A brief RFI workflow with supportive screenshot is provided below for the RFI creation, completion  closure. Since, the assigned user is selected from the 'Contacts' section (during RFI creation), the assigned user is either an account user (user added as an employee in the account from the Settings > Users tab) or an external project collaborator (the project within which the RFI is created is shared to the user with full access). This means that the assigned user already has access full access to the project within which the RFI is created and assigned.

The sequential workflow is given below,

The status of the RFI before response is OPEN.

The assigned user can reassign the RFI to another user (please check 'Viewing RFI at project-level' help file for more details on RFI reassignment).

The assigned user can open the responded RFI and view the RFI. This is shown below,

Note: The creator or the assigned user cannot reassign a responded RFI. Both these users can reassign a RFI with status OPEN i.e. before the RFI has been responded.

The creator will receive the responded RFI under the My RFI tab. This RFI is shown in the screenshot below,

If the creator chooses to close the RFI, then the status of the RFI changes to CLOSED. This is shown in the screenshot below,

Only the creator of the RFI can re-open a closed RFI.

Only the creator can reject a responded RFI by clicking the [Reject RFI] button, if he/she does not feel satisfied with the answer given in the RFI. The RFI with status rejected can be viewed on the RFI Dashboard screen. This is shown below,

Creator (under the My RFI tab), assigned & CC users (under the RFI assigned to me tab) can click to view the rejected RFI. This is shown below,

Only the creator of the RFI can re-open a rejected RFI.

Only the creator can make an RFI void (both after or before response) by clicking the [Void RFI] button, if he/she feels that the RFI is no longer required or duplicate RFIs related to the same query already exist in the project. The RFI with status void can be viewed on the RFI Dashboard screen. This is shown below,

Creator (under the My RFI tab), assigned & CC users (under the RFI assigned to me tab) can click to view the voided RFI. This is shown below,

Note: There is no option to re-open a voided RFI.

The creator can choose to reopen a closed or rejected RFI by clicking the [Reopen RFI] button if he/she thinks that the answer to the same RFI is required again from the original assigned user or from a different user (by reassignment). The assigned user will not be able to re-open the RFI, hence the [Reopen RFI] button will not appear to the assigned user. If creator re-opens the RFI, then the status of the RFI changes to RE-OPENED. This is shown in the screenshot below,

Creator (under the My RFI tab), assigned & CC users (under the RFI assigned to me tab) can now view the re-opened RFI. This is shown below,

Again, the same cycle of RFI response, closure will continue like a freshly created RFI. You can re-open a closed RFI any number of times.

RFI as viewed by CC users:

Users in CC list can only view RFIs and enter comments (with attachments). These users will be able to change status of RFI. These users can view the RFI under the All RFI tab. The screenshot below displays an RFI with RE-OPEN status as viewed by an user in the CC list:

[highlighted by the red rectangle in the screenshot below].

The download can be performed from the RFI Dashboard screen. Whenever you click on this button, multi-page pdf document consisting of RFI details, associated sheet and all the attachments will be created. This PDF document will be downloaded and saved in your local system.

The cover page of the downloaded RFI in pdf format is shown below, 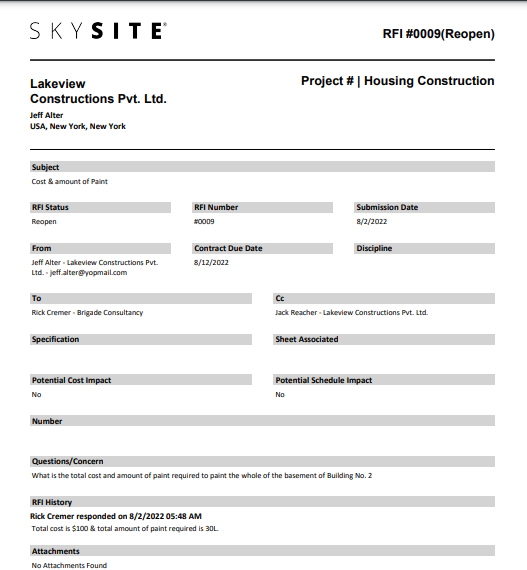 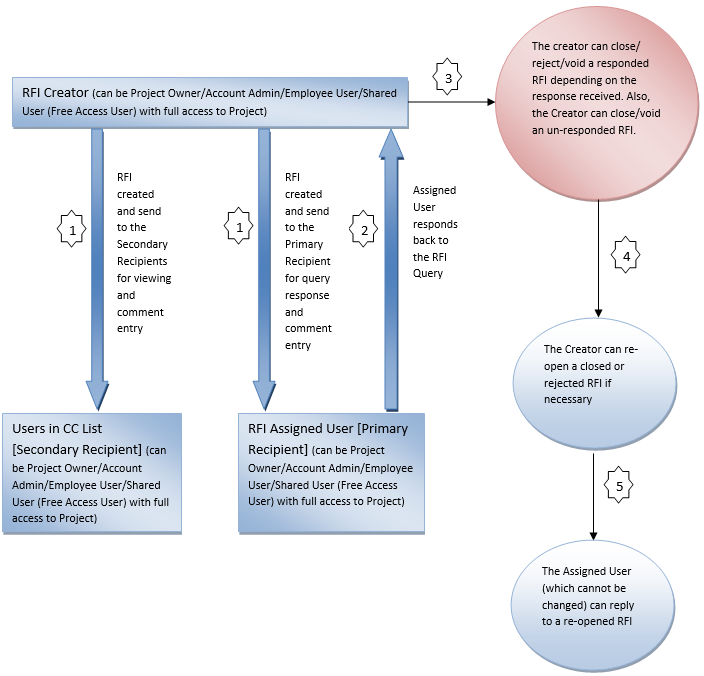